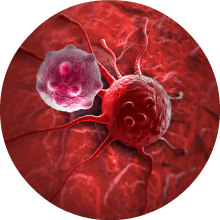 By definition, chronic inflammation and cancer are motivated by the same physiological process: the unregulated growth or division of cells that invade different areas of the human body. Chronic inflammation is also known to precede or accompany several instances of cancer growth.

The burden of cancer is growing around the world. According to the World Cancer Research Fund, there were approximately 12.7 million cancer cases worldwide in 2008. The total number of cases is expected to reach 21 million by the year 2030. According to the same study, 16.1% of those cases were attributable to infections, one of the leading causes of chronic inflammation (along with trauma and allergens).

There are over 60 types of cancer, including leukemia (cancer of the blood), lymphoma (cancer of the lymph glands), breast and prostate cancer and many more. Inflammation is a contributing factor to the development of inflammatory breast cancer, a rare and aggressive disease in which cancer cells block lymph vessels in the skin of the breast

As researchers continue their search for a cure for cancer, they only recently found scientific evidence to support a theory about chronic inflammation and cancer that dates back to ancient Greece.

The history of chronic inflammation and cancer

Around 2,000 years ago, the Greek physician Claudius Galenus was the first to remark on the similarity between inflamed and cancerous tissues. According to Galenus, the Ancient Greek philosopher and “Father of Medicine” Hippocrates had derived a variation of the word “cancer” to describe the inflammatory breast cancer found within a tumour.

The radiated and swollen appearance of the tumour’s superficial veins resembled the claws of a crab, a word that originated from the Ancient Greek term “karkinos.” Although Hippocrates and Galenus lacked an understanding of the cause of cancer, their observations were the basis for further research on chronic inflammation and cancer.

Another breakthrough wouldn’t come until the mid 1800s. In 1863, German doctor, biologist and politician Rudolf Virchow was the first to discover a definitive link between chronic inflammation and cancer. He hypothesized that cancer originates at sites of chronic inflammation.

Virchow claimed that several “irritants” (chemical, physical and microbial agents) cause chronic inflammation, tissue damage and increased cell proliferation. He believed that a complex inflammatory reaction to these irritants then leads to the spread of white blood cells (also known as leukocytes) in cancerous tissues.

According to Virchow, high levels of white blood cells were indicators of cancer at sites of chronic inflammation.

150 years after Virchow’s hypothesis, a study by Harvard University researcher Harold Dvorak supported his theory with evidence that inflammation and cancer share some of the same fundamental mechanisms (like angiogenesis) and tissue-infiltrating cells like mast cells, macrophages, granulocytes and lymphocytes, all hallmarks of the immune system.

According to Dvorak,  when a tumour begins to grow and develop genetic faults, the cancerous cells lure inflammatory immune cells into the tumour in an effort to survive. Once inside, these cells secrete molecules that jump-start the growth of blood vessels, supplying the tumour with much-needed nutrients and oxygen. 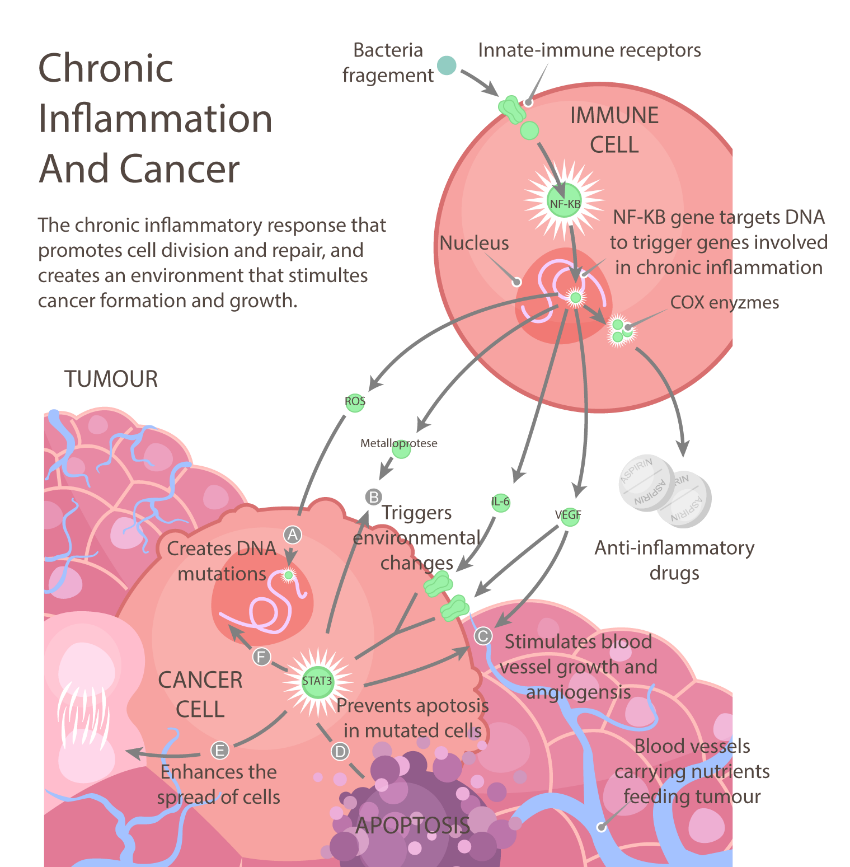 Dvorak also referred to tumours as “wounds that do not heal.” Dvorak observed similarities between physiologic wound healing and the generation of tissues that support the spread of cancerous cells. He found that both chronic inflammation and cancer occur when the body’s natural healing process goes awry.

More recently in 2011, a study by experts at the Ohio State University Comprehensive Cancer Centre and the Richard J. Solove Research Institute supported the idea that inflammation plays an indirect, yet significant, genetic role in the development of cancer.

The research team found that inflammation promotes a rise in levels of the microRNA-155 molecule (miR-155). A higher concentration of MiR-155 causes a decrease in levels of certain proteins that are important for DNA repair. This leads to a higher rate of gene mutations, which is known to lead to cancer formation.

Modern medicine has also come around to the idea of taking anti-inflammatory measures to prevent and slow the progression of cancer.

A recent study by Giorgio Trinchieri at the National Cancer Institute supported the idea that taking anti-inflammatory medication for 5 or more years can help protect cancer patients against death from colorectal or other solid cancers. His findings were a breakthrough in preventative inflammation and cancer research.

Dr. Trinichieri’s test subjects, who suffered from various types of cancer, took an Aspirin daily for more than 7.5 years. Researchers observed that from the start of the trials, the 20-year risk of cancer death was reduced by approximately 30% for all solid cancers, and by 60% for gastrointestinal cancers.

However, there is one anti-inflammatory treatment that is gaining attention as one of the most simple and straight forward ways to fight chronic inflammation.

Earthing as a defence against chronic inflammation and cancer

Earthing, the practice of connecting with the ground’s natural healing energy, is known as an effective treatment against chronic inflammation, one of the biggest danger signs associated with the development of cancer.

The most effective way to stay grounded is to walk barefoot outside to allow for direct contact with the Earth. Alternatively, you can take advantage of one of our many available Earthing products, like Earthing sheets and Earthing mats. We recently started offering women’s groundals from GetGroundedFootwear, the best footwear for staying grounded.

To put your best foot forward in the fight against chronic inflammation and cancer, begin your Earthing journey right away.