As the burden of inflammation and diabetes continues to grow, researchers are working hard to get to the root of the problem. People with Type 2 diabetes are usually obese, insulin resistant and suffer from inflammation. For years, however, 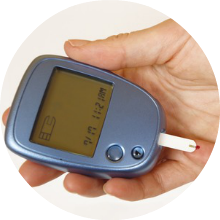 they weren’t sure how these characteristics were related – until now.

According to the Canadian Diabetes Association, an estimated 285 million people worldwide are affected by diabetes, a number that is expected to reach a staggering 438 million by 2030. In Canada alone, more than 9 million people live with diabetes or prediabetes today.

Although approximately 10% of people with diabetes have Type 1 diabetes, the remaining 90% suffer from Type 2 diabetes, a largely preventable disease that is most prevalent in adulthood. Of the two types, Type 2 diabetes displays the closest medical link between chronic inflammation and diabetes.

Recently, the evidence has been building behind inflammation as a root cause of type 2 diabetes. Though being obese or overweight makes it more difficult to control diabetes, it is not the cause. Actually, up to 35% of obese people are not affected by any kind of metabolic disorder, like diabetes and insulin resistance.

According to a 2013 study by University College Cork, inflammatory markers like white blood cells and C-Reactive Protein (prevalent in heart disease), may explain why some people can be considered both obese and metabolically healthy. The link behind chronic inflammation and diabetes deepens.

The researchers examined more than 2,000 subjects aged 45-74, the typical age group for people suffering from, or at-risk of type 2 diabetes. Those with lower adiponectin levels and higher levels of acute-phase response proteins and higher white blood cell counts were more likely to suffer from diabetes or heart disease. 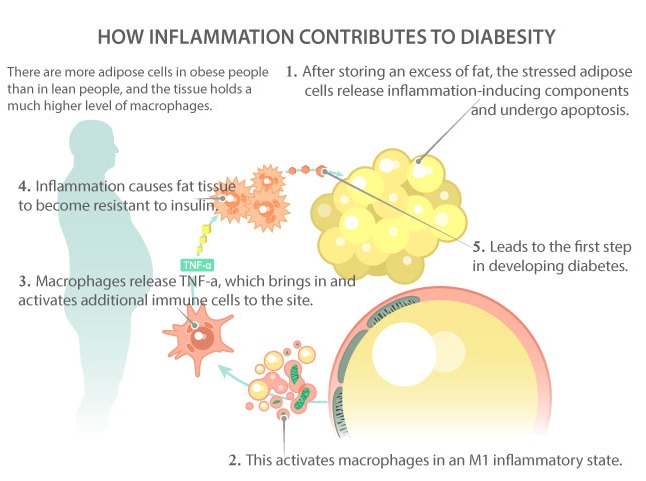 This process makes the human body less responsive to insulin, and more likely to develop insulin resistance. However, new research has surfaced that could completely change what we think about chronic inflammation and diabetes.

Chronic Inflammation as a Possible Treatment for Diabetes?

A 2013 report by Omut Ozcan, an obesity researcher at the Children’s Hospital Boston, identified a key inflammatory protein that can actually reduce insulin resistance. Though the protein, XBP-1s, was only observed in diabetic mice, it helps clear a path for new research related to chronic inflammation and diabetes.

Ozcan found that within diabetic obese mice, XBP-1s failed to enter the cell nucleus, where insulin function is regulated and maintained. When he studied the behaviour of that protein within lean, healthy mice, he observed that an inflammatory protein modifies XBP-1s so that it can be shuttled into the nucleus.

When Ozcan added inflammation-inducing chemicals to the diabetic mouse cells, it activated the inflammatory protein that shuttles XBP-1s into the nucleus. He was amazed to discover that insulin sensitivity improved, paving the way for a new era of research for chronic inflammation and diabetes treatment.

How Obesity Can Lead to Chronic Inflammation

Recent evidence supports the theory that the body reacts to obesity in the same way that it would to an infection – through inflammation. As determined by a Harvard University study, the same inflammatory, intracellular stress pathways are activated in both infection and obesity.

It is also possible that the activation of catabolism (the process of breaking down of tissues and organs) via inflammation is the body’s attempt to maintain an acceptable weight. To back this theory, a recent study determined that localized inflammation in fat tissue improves insulin resistance and causes weight loss.

Regardless of the validity of one or all of the above theories, researchers agree that diabesity can be a contributing cause of inflammation. As diabetes leads to insulin resistance, fat cells can’t store any more hyperglycemia and glucose results. Excess blood in the system leads to the production of AGEs, an inflammatory associated with Type 2 diabetes.

Earthing: A Natural Anti-Inflammatory Against Diabetes

Are you unfamiliar with the anti-inflammatory benefits of Earthing, the act of connecting with the ground’s natural energy? Similar to other chronic disorders like heart disease and cancer, Earthing has been shown to help reduce the negative health effects of chronic inflammation, a problem rooted in Type 2 diabetes.

To stay grounded, all you have to do is walk barefoot outdoors, or use one of our many tested Earthing products. Still not convinced? Watch the trailer for the Grounded documentary, featuring leading health experts, or read up on Earthing research and case studies.

Stand your ground against the debilitating effects of chronic inflammation and diabetes. Start Earthing today to feel better and live a rejuvenated life.

Posted on January 6, 2014 by kkelly in Inflammation Information, Science & Research