Like heart disease and arthritis, chronic inflammation and Inflammatory Bowel Disease (IBD) are intrinsically linked. IBD is an umbrella term for several medical disorders that carry one common denominator: chronic inflammation. IBD is an idiopathic disorder that mainly affects the body’s digestive tract, with the highest concentration of inflammation in the colon and the small and large intestines. 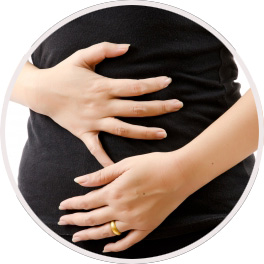 However, the negative health effects of Inflammatory Bowel Disease reach further than our digestive system. Anemia, joint pain, weak bones, growth problems, delayed puberty, kidney and gallstones and liver inflammation are a few of the many complications that can result from IBD. Of all the symptoms of Irritable Bowel Syndrome that are unrelated to the digestive tract, arthritis is the most common.

Experts have noted an increase in cases of IBD among people aged 50 to 60 years old, but the majority of IBD sufferers are between the ages of 15 and 30, and about 15% of them are diagnosed by the age of 18.

So, what exactly is this mysterious disease?

What is Inflammatory Bowel Disease

Despite similar symptoms, IBD is not the same as Irritable Bowel Syndrome (IBS). The underlying difference is that IBS does not cause intestinal damage or inflammation like IBD.

IBD is a known by-product of chronic inflammation in some or all parts of the digestive tract. As a chronic disease, IBD sufferers experience periods of both flare ups and remission. When IBD flares up, symptoms can range from mild to severe, depending upon which part of the intestinal region is affected. Flare up symptoms can include:

Did You Know?
According to the Crohn’s and Colitis Foundation of Canada, over 200,000 Canadians suffer from Inflammatory Bowel Disease.

While in remission, most or all symptoms disappear and the person’s health is restored until the next outbreak. Remission can last days, weeks or even years.

Although IBD refers to numerous digestive tract disorders, Crohn’s disease and ulcerative colitis are the two major and most common forms of IBD.

Ulcerative colitis causes tiny ulcers, open sores and swelling to form on the innermost layer of the rectum and large intestine. In extreme cases, the ulcers can create a hole in the intestinal wall and cause the contents of the large intestine, like bacteria, to seep into the blood or abdominal cavity. This can lead to a life-threatening infection that requires emergency surgery.

Unlike ulcerative colitis, the inflammatory properties of Crohn’s disease can occur anywhere along the digestive tract from the mouth to the anus. More often than not, Crohn’s disease targets the colon or small intestine. Those who suffer from Crohn’s disease are unable to fully absorb the nutrients from the food they digest. In turn, it can lead to malnutrition or greater health risks.

Unfortunately, IBD continues to be an idiopathic disease as experts have yet to pinpoint what exactly triggers it. However, there is an abundance of research that indicates a few possibilities.

Some researchers consider IBD to be an autoimmune disease in which the body’s immune system attacks the digestive system. The theory claims that for those living with IBD, the immune system fails to switch off like it should and begins to wipe out normal bacteria within the digestive system. This process then causes damage to the digestive tract that ultimately leads to the onset of IBD. Unfortunately, this does not explain what triggers the often debilitating disease. 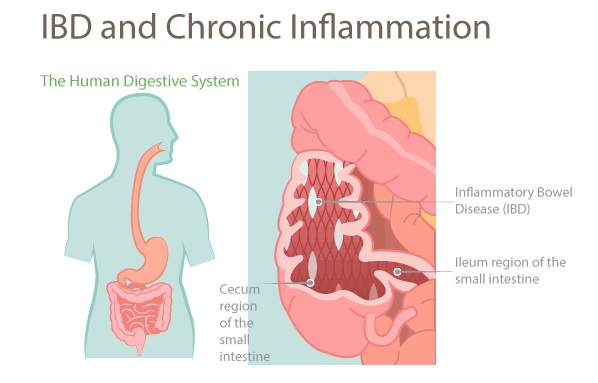 Strong evidence exists indicating a genetic disposition for Inflammatory Bowel Disease. Approximately 20% of IBD sufferers have a family history of the disease, and IBD is more commonly found among Caucasian populations.

Since the first gene associated with Crohn’s disease (NOD2 gene) was discovered in 2006, researchers have discovered more than 200 related genomic regions for IBD. Although a gene has been identified, the NOD2 gene is also found in approximately 4% of individuals who never develop Inflammatory Bowel Disease.

These findings do not eliminate the possibility for a genetic predisposition for IBD, but they do imply that genetics alone are not to blame. Another variable must exist in order to trigger IBD.

A study in Japan reported an increased risk of developing Crohn’s disease in women who consume high amounts of protein, while other studies have found a possible link between Crohn’s and those who consume a high-fat and high-sugar diet.

However, health experts agree that your diet is not solely responsible for the development of IBD, but poor nutrition has been found to worsen the condition.

Although the exact cause of IBD continues to be a mystery, many experts believe it is not a single variable but rather a combination of factors that initiate the onset of IBD.

Earthing Can Help with Chronic Inflammation

Of the millions of people living with IBD worldwide, most are able to lead full and active lives. Thankfully, there is medicine available that helps to control symptoms and only extreme cases of IBD require surgery. Although chronic inflammation isn’t the only contributing factor to the onset of IBD, symptomatic inflammation is ever present when a flare up is active.

One thing is for certain: Earthing has been shown to help with inflammation, which is a key factor in IBD. Connecting with the ground’s free radicals infuses our body with the anti-inflammatory compounds it’s been missing. There are several ways to benefit from the positive health effects of being grounded, like walking outside barefoot, kicking off your shoes at the beach, sleeping on an Earthing bed sheet or grounding with an Earthing mat at your office.

If you’re suffering from Inflammatory Bowel Disease, get back to your roots and start Earthing to feel better and fight the effects of chronic inflammation.

Posted on September 24, 2013 by Kurt in Inflammation Information