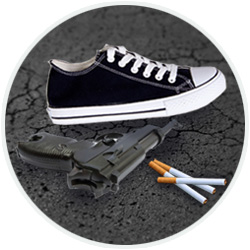 When Clint Ober began considering the potential connection between human health and electrical grounding, one of his primary observations was that humans have a near total disconnect with the natural energy of Earth thanks to the synthetic soled shoes we’ve been chronically sporting, especially since the second half of the twentieth century. He wondered if a poorly grounded human would produce the same results as a badly grounded electronic instrument. After having an impressive scientific look at the notion, it seems that his curiosity was right on track.

Initially, it may seem far-fetched to consider the possibility that shoes are bad for our feet and overall health; I certainly thought so, but some notions tend to take time to assimilate. Remember when our ancestors were certain that Earth was flat?

Today, more and more research is mounting that demonstrates the negative effect the seemingly innocent shoe can have on overall health.

Overall health aside, shoes may not even be good for our feet – the very things they were designed to protect.  In 2008, New York Magazine published the article, You Walk Wrong which blatantly claims that using shoes is a healthy living no-no because wearing them changes the way in which our finely tuned machine was naturally designed to walk.

What does Research Have to Say?

Examining the role foot health plays on the human organism is a relatively young science but more research is accumulating that addresses the question, are shoes bad for your feet?

In 2007, a South African research team examined the foot health of two cultural groups: one European and one African. The study concluded that the habitual shoe wearing group (the Europeans) had unhealthier feet than the barefoot culture of the Zulu population who had the best foot health. When discussing the findings, one of the lead researchers of the project, Dr. Bernhard Zipfel commented that today’s commercially available footwear is not healthy for the feet.

A 2009 study examined the link between hip, ankle and knee pain with shoes. The research team compared the effects on joint motion while running with modern day running shoes versus running barefoot. The experts were surprised to find that running barefoot exerted less joint stress than when doing so with running shoes. Although research continues, the scientists hypothesized that the additional joint stress was due to the characteristic design of modern running shoes which includes more material below the foot’s medial arch and an elevated heel.

Other smaller studies suggest that there is an increase risk for plantar fasciitis and ankle sprains when running in shoes.

The Science of Earthing

The sole of the foot has one of the highest concentrations of nerved endings in the body – about 7,200. This is because the foot was designed as a means of communication between the ground below us and the central nervous system. When we slap three to four inches of synthetic material between the foot and the ground, the message becomes isolated and distorted-just like a badly grounded cable connection.  Our feet are perfectly designed pathways between the Earth and the nervous system, when there is a lack of healthy connection, this can lead to various problems in the body.

Clint Ober, in partnership with medical professionals like Dr. Stephen T. Sinatra embarked on a journey that didn’t specifically examine the negative physiological effects that shoe wearing can have on the body but rather the effects being grounded can have.

Their research found that by connecting and grounding to the Earth’s energy, whether walking barefoot outdoors or using Earthing devices such as bed pads, allowed the body to align with, and absorb the subtle nurturing energies found on the Earth’s surface. This not only produced better sleep patterns and a reduction of pain in research subjects, but also decreased the presence of free radicals in the body by providing an abundance of negative charged electrons for them to bind to.

Though walking barefoot is the most naturally effective way to stay grounded, there is specially designed footwear that can help you to benefit from the Earth’s healing energy. Pluggz shoes contain a conductive ‘plug’ that keeps you grounded and comfortable for as long as you wear them.

If you make the choice to wear shoes, groundals are an efficient, comfortable and stylish option for staying grounded.

Posted on February 4, 2013 by Kurt in Earthing Tips, Science & Research