What is Earthing? Earthing is much more than your typical transcendental journey through the Chakra system. In reality, the relatively new concept has many professionals regarding Earthing as one of the most important health discoveries of our time. With so much scientific evidence supporting its positive effects on overall human health, it’s difficult not to wonder, what’s all the hype?

Earthing, also known as grounding, is based on research that demonstrate that connecting to Earth’s electrical energy promotes physical wellbeing. The act of Earthing refers to a physical connection between the electrical frequencies of the human body with that of Earth’s (think barefoot in the grass, or at the beach). Just like the sun constantly provides us with energy and vitamins, the earth too is a source of subtle energy that contributes to optimum health.

Earthing can be achieved in a number of ways: standing, sitting, lying or walking with direct skin contact with the ground is the easiest but conducting and grounding products like bed sheets provide a convenient method of connecting with Earth when it’s otherwise impractical.

Although Earthing is a rapidly growing movement that have many people excited about the future of physical health, it hasn’t always been so widely accepted. In fact in the late 1990s when a retired cable TV executive named Clint Ober first introduced the idea, he was met with skepticism and even ridicule. What does a cable guy know about health? Apparently, much more than you’d think. 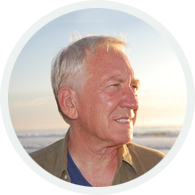 After retiring, Ober started to take note of the fact that almost everyone is now sporting synthetic-soled footwear made of non-conductive materials – he knew that these shoes with rubber and plastic soles prevent us from being grounded.  Ober then began to wonder what effect, if any, this relatively recent and widespread disconnect with the earth had on the human body. If at all like the world of cable, he thought this case of habit could very well mean we’re passing a large part of our lives ungrounded and therefore disconnected from Earth’s stabilizing energy field. Could this disconnect have a detrimental effect on human health? After failing to rally support from the world of science, Ober took things in his own hands and began performing his own studies to see if his theory had any validity.  In time, his work gained the attention of a few members of the medical community including renowned cardiologist, Stephen Sinatra.

For over a decade, Ober and a handful of supporters performed various studies that examined the effect that sleeping while grounded had on physical health. The results were consistent: participants reported sleeping better as well as a reduction in pain.

Initially Ober believed the elimination of static electricity (imagine minor blips within energy flows) to be the cause of such positive results. Although certainly true, the lack of static electricity only accounted for part of the answer of why Earthing works. In fact, Ober was inadvertently providing the world of science with a never before seen piece of the chronic pain puzzle.

Ober knew that Earth’s electrical surface is made up of negative charged electrons (also known as free electrons). These electrons have the ability to move more freely and reduce positive charges (free radicals).  Free radicals continue to ravage our bodies healthy cells in search of the one thing they are missing, an electron.  Once a free radical finds it’s missing electron, it is satiated and is no longer contributing to the inflammation in the body.  While many of us may grow to be ‘electron deficient’, we now understand that the earth below our feet is the greatest source of these electrons.. if only we stay in contact with it.

Finally, after years of his initial research, Ober received scientific support in 2004 when the Journal of Alternative and Complementary Medicine published one of his studies. The results were impressive: ‘Earthing during sleep resynchronizes cortisol secretion more in alignment with its natural, normal rhythm.’ Cortisol secretion is the body’s natural reaction to stresses.

However, when electric rhythms comparable to those measured at the Earth’s surface were pulsed into the metal shielding around the underground chambers, there was a substantial restoration of normal physiological patterns.

Evidence suggests that negative-charged free electrons on Earth’s surface are responsible for bringing the electric energy levels of the human body in accordance with that of the earth which in turn promotes overall health and vitality.

Studies have shown numerous positive results including the following amongst others:

Although the science of Earthing is a relatively new field, more and more evidence suggests that suffusing the body with negative electrons produces virtually immediate positive results such as equalizing energy levels, synchronizing hormonal cycles and establishing proper physiological rhythms.

Earthing: The Holy Grail of Medicine?

A key factor that has medical professionals intrigued is Earthing’s reported effects on inflammation. Currently, inflammation is linked to nearly eighty chronic illnesses including major diseases like cancer and type 2 Diabetes. Dr. William Meggs from East Carolina University claims that ‘inflammation may turn out to be the elusive Holy Grail of medicine – the single phenomenon that holds the key to sickness and health.’

Although science continues to play a game of catch up with nature, Earthing seems to be a valid and definitely low-maintenance approach toward living a healthy lifestyle. If possible, simply find a patch of earth, kick off your shoes and spend some time in contact with the Earth.  Even 20-30 minutes can make a remarkable difference.  Unfortunately, this approach to earthing is not always practical with our modern day life styles and synthetic footwear… Earthing Products exist as a convenient way to maintain contact during work, rest or sleep.